RE:ZERO Anime VAs to Live-Stream Special Program Instead of The Cancelled Event on March 7 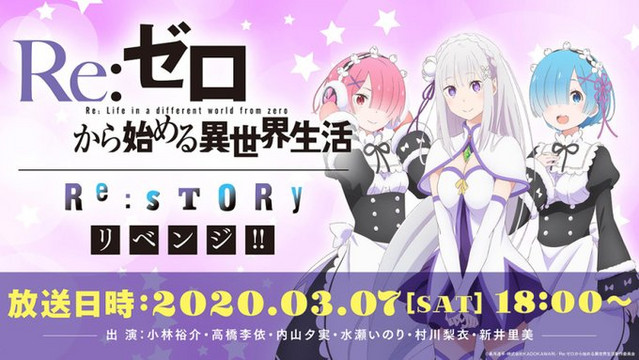 "-Re:STORY- Revenge!!" will be held as a replacement for the canceled live event "-Re:STORY-," which was planned to be held at Chiba Civic Hall twice on the day to promote the launch of the upcoming TV anime second season. As well as other various events in Japan, it was canceled in order to prevent the spread of COVID-19 / coronavirus. The 8,800-yen tickets for the two shows were immediately sold out, and the organizer says they will be refunded.

Participation of the event's four original musical guests, Konomi Suzuki, Mayu Maeshima (ex. MYTH & ROID), nonoc, and Riko Azuna have not yet been determined at this time.